Dining Etiquette for When Traveling around the World 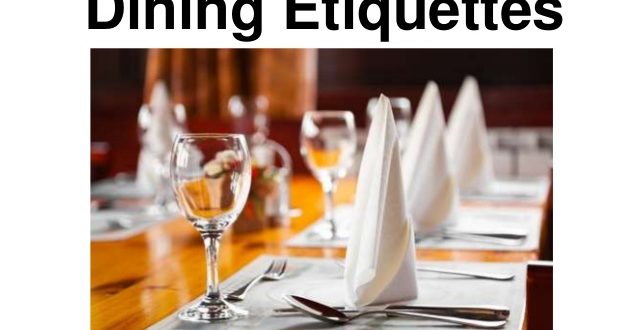 Once you start traveling to different places, you’ll be amazed at how much different or the same some of their diningpractices are. In France, for example, your bread should be on the table, not your plate.

Here are some tips on dining etiquette around the world:

Asking for salt and pepper is an insult to the chef. So, don’t ask the waiter to bring you the salt and pepper shakers if they’re not provided on the table. But make sure to leave a tip – 10 percent of your bill would be enough.

It’s rude to cross, lick or stick your chopsticks upright into a bowl of rice. Also, don’t pass food using chopsticks as a similar practice is done at funerals. But drink directly from the soup bowl as spoons are not usually provided. Show your appreciation to your host or to a restaurant’s chef by slurping noodles and soups. Oh and don’t leave a tip to your waiter as it is not customary in the country.

It’s okay to rest your hands and wrists on the table in France as it is common here. You can also use your bread to finish off sauces or food bits on your plate. Don’t bite directly into the bread; tear off a piece instead. When you’re with a French pal, it’s considered unsophisticated to offer to split the bill. You either pay the entire amount or let your friend do it.

Make it a point to wash your hands before and after eating as cutlery is rarely used here. Always use the right hand to eat because the left hand is considered unclean. Also, eat a medium pace.

Don’t be surprised if you’re served with all dishes at once, not in set courses. Use your fork only to push food onto your spoon, not eat from it. And if there’s a last piece left in the sharing bowl, don’t take it. But do share the food with your companions.

Belching is seen as a compliment to the chef’s cooking prowess in the country. Also, leave a small amount of the food you were served on your plate to show the cook that you were given more than enough to eat. When invited by a local, be sure to arrive on time and dress presentably out of respect for the host or other diners. Most importantly, don’t dig through your plate for something in particular, like carrots or peas you don’t want to eat, as this is also a rude gesture.